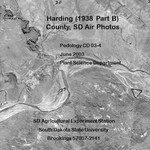 Pedology CD 03-04
This file contains 202 images from 1938 Part B for Harding County, SD.
The paper copies of the air photos were deteriorating and this method was used to keep the information. The photos are from Harding (1938 Part B) County, SD. No index map was prepared for the photos. The scale of the original photos was 1:20,000 or 3.17 inches = 1 mile. The inventory of images does not represent coverage of the entire county. The images contained in this file represent part of the air photo collection for Harding County, SD that the South Dakota State University (SDSU) Pedology Project had on June 2003.
The structure of the file is as follows: