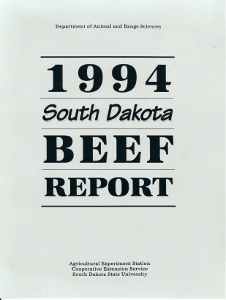 Effect of Synovex, Synovex + FinaPlix, and Revalor on Daily Gain and Carcass Characteristics of Yearling Steers

The objective of this study was to determine if there were differences in daily gain and carcass traits of yearling steers implanted with Synovex-S (S), Synovex-S + Finaplix-S (S + F), or Revalor-S (R). Upon arrival at the feedlot, 264 steers (average weight 731 Ib) were allotted to 24 pens and adapted to a 90% concentrate diet over a period of 23 days. They were implanted on day 20 with either S, S+F, or R. No differences were found between S + F and R (P>.10) at any time during the study. However, combination implants (S+F and R) both resulted in 10% greater weight gains (P< .01) between days 57 and 84 of the study (37 and 64 days postimplanting) than S implanted steers. Some of this advantage was lost after day 11 3 (93 days postimplanting), as combination implant cattle gained almost 8% less per day than those implanted with S (P< .01). During the portion of the study when all implants could be expected to be fully functional (days 9 through 93 postimplanting), combination implant treatments increased daily gain by 3.7% (P<.05) over S. Steers were slaughtered at an average of 11 5 days postimplanting. No differences in carcass characteristics were found (P > .20).