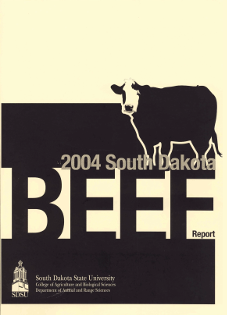 In a two-year study at the SDSU Cow/Calf Teaching and Research Unit, Brookings, SD, heifer calves were allotted to two weaning management treatments in early October at an average age of 202 days. The pasture-weaned group was separated from their dams and grazed grass pasture across the fence from their dams for two weeks. Then, until early December, they grazed “Robust” barley (forage type) that had been no-till planted into oat stubble in early August. The drylot-weaned group was fed a traditional weaning diet of grass hay, corn, and protein supplement from weaning until early December. The effect of management on heifer weight gain depended on year. In the first year, pasture-weaned heifers gained more than the drylot group during the first two weeks after weaning. Due to less than ideal pasture conditions in the second year, the drylot group gained more than the pasture weaned group for two and four weeks after weaning. In both years, gains from weaning to the end of the grazing period in December and to the following April were similar between management systems. Pasture weaning appeared to cause less stress for both cows and calves, but no differences in disease symptoms were observed. Antibody titers for IBR, BVD type 1 and BVD type 2 were determined at weaning and two and four weeks after weaning to measure the development of immunity from vaccinations administered two months prior to and at weaning. At two weeks after weaning in the second year of the study, antibody titer for BVD type 1 was greater for the drylot group than the pasture-weaned group. By four weeks after weaning the pasture-weaned heifers had antibody titers similar to the drylot group. The results of this study indicate that pasture weaning combined with small grain pasture to extend the grazing system can be an effective alternative for managing replacement heifers compared to a traditional drylot weaning system.