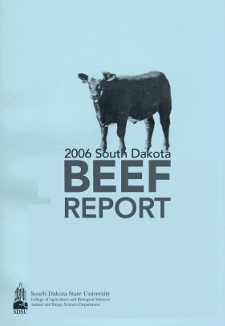 Dried distillers grains plus solubles (DDGS) contain a significant amount of both undegradable intake protein and fat, which have both been shown to increase reproductive performance when supplemented to heifers during gestation. The mechanisms leading to enhanced reproduction when fat or UIP are supplemented have not been fully defined. The objective of this experiment was to evaluate DDGS or soybean hulls (SBH) fed during the last trimester of gestation on circulating concentrations of growth hormone (GH) and insulin-like growth factor-I (IGF-I) and reproductive efficiency. Ninety-five crossbred heifers were grouped by expected calving date, BW, BCS, and randomly assigned to DDGS or SBH (n = 6 pens per treatment). Diets were formulated to be isoenergetic and meet the nutrient requirements at d 240 of gestation. Diets were limit fed during the last trimester of gestation until parturition. Blood samples were collected prior to calving and once per week for 4 weeks following calving . Treatment had no effect on circulating concentrations of GH or IGF-I. Time influenced both GH and IGF-I. Circulating concentrations of GH were elevated at calving and decreased by 4 d after calving. Circulating concentrations of IGF-I rose for the first 2 d following calving and then decreased through d 6. At the start of the breeding season there was no difference between DDGS and SBH in the percent of heifers that had initiated estrous cycles (74% and 70%, respectively). There was a tendency for more DDGS treated heifers to become pregnant during a 64 d natural service breeding season compared to SBH treated heifers (92% vs 80%, respectively). There was no difference in the distribution of pregnancies throughout the breeding season between treatments. In summary, DDGS and SBH fed during the last trimester of pregnancy to heifers resulted in similar patterns of circulating concentrations of GH and IGF, but DDGS treated heifers tended to have improved pregnancy rates during a defined breeding season.