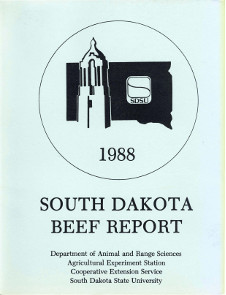 Eight pens of cattle that had been limit-fed a high energy growing diet and eight pens that had been full - fed a high roughage growing diet were fed either ad libitum amounts of a finishing diet or 93% of ad libitum for the first 70 days of the finishing phase. From day 71 through slaughter, all cattle received ad libitum amounts of the finishing diet. Interactions between previous growing program and level of feed intake during the finishing phase were significant (P<.05). Restricting the intake of finishing cattle that had been grown using a limit-fed, high energy diet resulted in improved (P<.05) feedlot performance (3.58 vs 3.28 lb per head daily average daily gain, respectively) and efficiency (6.18 vs 7.11, respectively) over the ad libitum fed cattle. For the cattle that had been grown using a high roughage program, restricting the intake of finishing cattle resulted in poorer (P<.07) performance (2.83 vs 3.16 lb per head daily, respectively) and efficiency (7.88 vs 7.19, respectively) compared with the ad libitum fed cattle. Whether or not cattle respond to restricted intake finishing regimens may be dependent upon level of dry matter intake, dietary energy density or rate of gain during previous growing program.