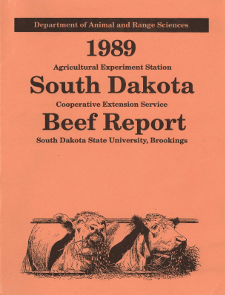 Relative date of first calving of beef heifers was studied in relation to production efficiency and subsequent reproductive performance. Crossbred heifers were managed in drylot for 1 year, providing for measurement of feed intake through weaning of the first calf. Production traits were evaluated by calving group (CG), where CG1 included records of heifers calving (and calves born) in the first 21 days of the calving season for a particular year, CG2 included those calving from 22 through 42 days and CG3 included those calving after 42 days. Calving groups did not differ significantly for preweaning calf average daily gain, while weaning age differences resulted in heavier weaning weights for CG1 compared to CG2 and CG3. Earlier relative calving date was associated with increased cumulative feed energy intake of heifers and their calves during the 1 -year test period. In terms of production efficiency, the weaning weight advantage of earlier calving was only partly offset by increased feed energy intake of the dam-calf unit, resulting in .9 Mcal metabolizable energy (ME) less per Ib calf weaning weight for CG1 vs CG2 and 2.9 Mcal ME less per Ib calf weaning weight for CG1 vs CG3 for the 1-year period. Results suggested that within a limited calving season, earlier calving dams tended to be biologically and economically more efficient, apparently at least in part because a greater proportion of an annual production cycle consisted of a productive (lactating) mode, diluting maintenance costs as a fraction of all costs. Heifers in CG1 tended to calve earlier than CG3 heifers for the second calf. Calving interval was a biased measure under the management conditions of a limited breeding season and culling of open cows.