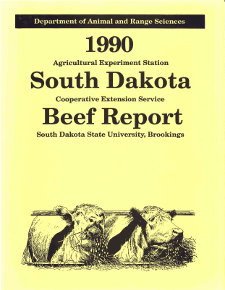 A 2-year study involving 178 cow/calf pairs was conducted to evaluate hydrolyzed feather meal4 as a protein supplement for cows grazing native range during early lactation. Calving season occurred from mid-March until late April. Within a week after calving, cows were fed either a soybean meal or feather meal-corn supplement that provided approximately .83 1b crude protein per cow daily. Cow weight and condition score changes from calving until early May and percentage of cows cycling early in the breeding season (early June) were similar between supplement groups. Calf average daily gains from birth until May were not affected by supplement fed to cows. In this study, supplementing lactating cows with hydrolyzed feather meal resulted in similar performance, regardless of cow age, as supplementing with soybean meal.