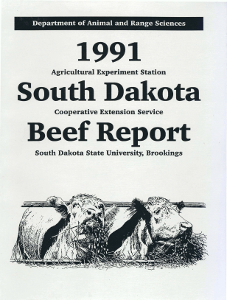 Feedlot performance and carcass development were compared between heifers fed a low energy diet for an 88-day backgrounding period before receiving a high energy diet (LE) and heifers receiving a high energy diet throughout the trial (HE). The LE heifers were delayed in carcass and muscle growth (P<.10) when compared to HE heifers on day 89. At an 1100 1b weight constant, LE and HE carcasses had similar dissected muscle weights, rib fat measurements and marbling scores. Carcass dressing percentage was only affected by time (P<.10) on an energy dense diet at 1030 Ib. During the initial 88-day background period, HE heifers had higher ADG (P<.001) and lower Feed/gain requirements (P<.001). During realimentation, compensatory growth was exhibited through increased ADG (P< .lo) and improved feed/gain (P<.05) for LE heifers. From day 0 until slaughter, the cumulative ADG for HE heifers was greater (P<.05) and the cumulative feed conversion was lower for HE heifers (P<.10).