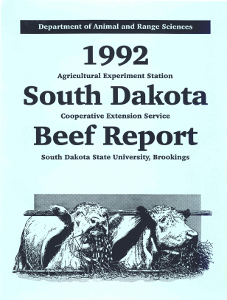 An Update on Retained Ownership: Case Study of Calves Born at the Antelope Range Livestock Station

An update to a previous report on the case history of retained ownership in the Antelope Range Livestock Station herd is provided. Calves born in 1990 and 1991 were placed in a custom feedlot following weaning and the profitability of postweaning feedlot performance was estimated. Retaining ownership through slaughter, as opposed to selling calves at weaning, resulted in additional estimated profits of $51.27 and $107.82 per head (excluding interest on calf) for the 1990-born and 1991-born calf crops, respectively.