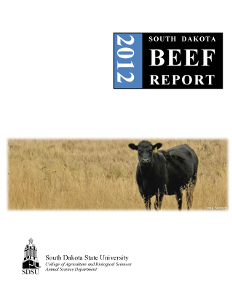 The objective of this study was two-fold: 1) determine the conditions (temperature, pH) that exist in early postmortem muscle of normally-chilled and delay-chilled beef carcasses to provide a model for in vitro work, and 2) determine the mechanism by which specific early postmortem temperature/pH conditions found in normally-chilled and delay-chilled muscle influence the enzymes that regulate the aging process in vitro. For objective 1, seven market-ready calves (HCW 848 ± 17.5 lb) were harvested with the right sides subjected to normal chilling (2.3°C) and the left sides subjected to ambient temperature (delay chilling; 22.6°C) for an additional 4.75 h and then allowed to normally chill. Carcasses were monitored for longissimus dorsi muscle temperature, pH, postmortem proteolysis, and sarcomere length. Steaks aged for 1, 7 and 14 d were evaluated for tenderness using Warner-Bratzler shear force (WBSF) and carcasses were swabbed over the rump, flank, and brisket for total aerobic plate counts. Delay-chilled carcasses had a faster pH decline and a slower rate of carcass cooling (P<0.05). No differences were seen in sarcomere length, total plate counts, or in postmortem proteolysis of troponin T (TnT)(P>0.05). WBSF was not different at 1 and 7 d (P>0.05), but was less in steaks from normally-chilled carcasses at 14 d (P=0.0144). Further data analysis indicated a strong, negative correlation between 14 d WBSF and the change in pH from 6 to 12 hr postmortem (Figure 3, r = -0.8105, P=0.0004). These results were utilized to design the methodology for objective 2, where isolated myofibrils were subjected to μ-calpain digestion at 4 or 22°C with either a fast or slow initial pH decline. Digests were evaluated for pH, μ-calpain activity, and intact TnT degradation. Digestions with a fast initial pH decline had lower pH values in the early time points of the incubation (P<0.05). No differences were detected in μ-calpain activity or in the degradation of intact TnT (P>0.05) between the fast and slow pH decline treatments. Meanwhile, a temperature x time interaction was revealed in μ-calpain activity and in the degradation of intact TnT (P<0.05). Additionally, intact TnT and μ-calpain activity decreased over time (P<0.05) while warmer digestions resulted in a tendency for reduced μ-calpain activity (P=0.0854) and a significant reduction in intact TnT (P=0.0105).