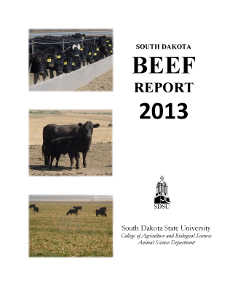 Two methods of harvesting drought‐stressed corn as large round bales were compared in this study. Three acres of drought‐stressed corn were cut and either baled as high‐moisture bales and wrapped in plastic (BALEAGE), or allowed to completely dry and baled with a conventional large round baler (DRY). Core samples were analyzed for moisture, CP, ADF, NDF and in vitro NDF and DM digestibility. Samples from the BALEAGE treatment were lower in CP than those from the DRY treatment. Concentrations of ADF and NDF did not differ between BALEAGE and DRY. Dry matter and NDF digestibility were also similar between the treatments. The challenges of physically handling the bales from the BALEAGE treatment and in maintaining the integrity of the plastic barrier limit the usefulness of this technique compared to either chopping the corn for silage or harvesting the corn as dry, large round bales.